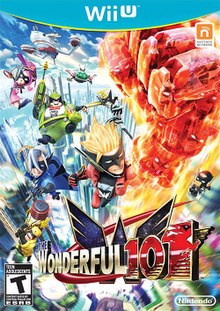 In The Wonderful 101, players control a horde of superheroes from an isometric viewpoint and can turn them into various objects called “Unite Morphs.” As levels progress, players must explore each stage to find helpless citizens and recruit them to join their army of heroes. The more heroes gathered, the greater the special morph powers can be. At the cost of depleting their battery meter, players can use “Unite Morph” forms to defeat enemies, solve puzzles, or traverse the environment. The meter can be recharged by performing normal attacks or by picking up batteries dropped by a defeated enemy. Enemies will also drop “O parts” (the in-game currency used to buy upgrades), new “Unite Morph” abilities and items. To transform the horde of heroes, the appropriate symbol is drawn on the Wii U GamePad’s touchscreen or right analog stick, such as an “L” for a gun or a squiggly line for a whip. In specified areas, the GamePad (by default) is used to change the view to a traditional, third-person angle and better explore tighter environments, such as those found indoors and inside caves.